Walking in the footsteps of Jane Austen

How better to enjoy one of the country’s most stunning cities than with a right good old walk, taking in the Roman Baths and a very fine Georgian crescent?

The compact city of Bath, a UNESCO World Heritage Centre, is easily explored on foot.

From the station, walk straight ahead along Pierrepont Street to Bath Abbey on the left. A guided visit up the tower (not available on Sundays) provides grand vistas across the city and the guide shares plenty of local history.

Pick up a street map at the adjacent tourist centre before walking around the corner to the unbelievably well-preserved Roman Baths. It’s amazing to think that 2,000 years ago, Romans were bathing in these natural thermal waters.

Heading north west to Victoria Park provides the best views of the majestic Royal Crescent, a sweep of 18th-century Palladian mansions widely regarded as one of the best examples of Georgian architecture.

To the east, along Brock Street, is the Circus, a complete ring of Georgian townhouses where the stonework shows the architect’s fascination with ancient symbols. Be sure to stand among the trees in the middle to get the full effect of this latter-day stone circle.

From the Circus, Gay Street leads south to the Jane Austen Centre. Austen not only lived in Bath but also used it as the setting for her novels Northanger Abbey and Persuasion. Visitors can discover Austen memorabilia, find out obscure biographical details and even dress up in classic Regency costumes.

A refreshment break should be taken at Sally Lunn’s historic eating house, near the abbey. It is one of the oldest houses in Bath and home to that famous Georgian speciality, the Bath bun – a sweet treat that’s stood the test of time.

Fully rejuvenated, head across Pulteney Bridge on the river Avon, perhaps the most beautiful bridge in England. It’s certainly different from most bridges you’ll see in the UK and is commonly compared to the Ponte Vecchio in Florence, as both are lined with shops. 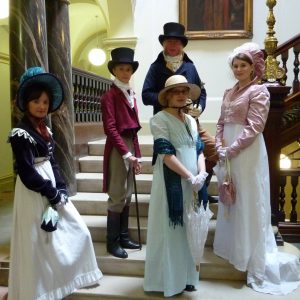 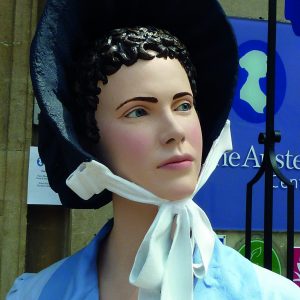 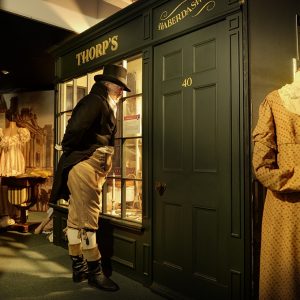 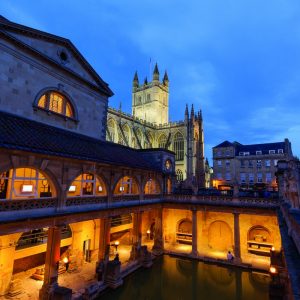