‘When I was eight, I told my parents I wanted to join the circus’

‘I said to my parents, “That’s what I want to do when I’m older”,’ she explains over the phone from Germany where she’s touring the show. ‘At the time, they were probably, like, well OK…

‘But from then on, I trained five days a week. I travelled an hour and a half just to get there – I was totally committed. There was a lot of training, a lot of sacrifices, but it got me where I am today, and I wouldn’t change it for the world.’ 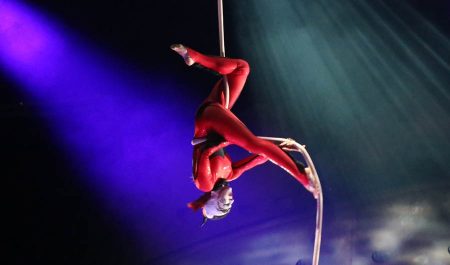 Alanna Baker as the black spider in OVO

Baker took up gymnastics when she was five years old, and since her first encounter with the Canadian entertainments company, she’s competed for Great Britain, coming first at the European Championships, and third at the World Championships in 2012.

Once she had stopped competing, Baker was invited to audition for Cirque du Soleil at her local gym in Heathrow. Before she knew it, she had moved to the company’s home of Montreal, Canada where she trained for several months before heading out on tour. 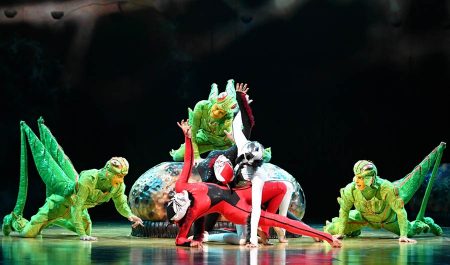 Caught in her web: the spiders meet the grasshoppers in OVO

She’s been playing her current role, the black spider, in the company’s show about the life of insects for three years now. But there’s no sign of the performance becoming stale.

‘There are certain parts of the show that are choreographed, but we’re encouraged to improvise,’ Baker says. ‘So, every time I go on stage I’ll do something different.

‘I like to think outside of the box. I always say: “You should never stop growing – you should constantly evolve”.’ 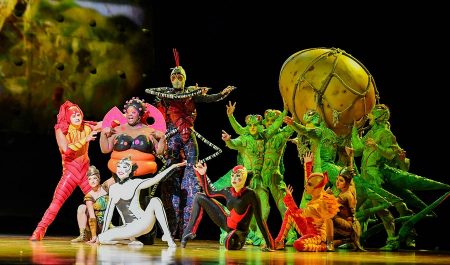 Striving for self-improvement is key to Baker’s success, which is clear from the selfies she takes at the gym and posts on her Instagram account. But does she ever stop?

‘Everyone says that I’m quite crazy,’ she explains. ‘I really enjoy the gym and I’ll work out a couple of times a day, even if we’re performing and rehearsing.

‘I’m always on the go. But, for me, it’s part of my lifestyle. I don’t find it a chore to go to the gym. And if I don’t go, I feel sluggish. Working out gives me more energy.’

See Alanna Baker perform as the black spider in Cirque du Soleil’s OVO, which runs at the Royal Albert Hall from 7 January – 4 March 2018. The show will then tour UK arenas from 16 August–7 October 2018.
cirquedusoleil.com

Family / Wellbeing
Days out in Dogtober: fun with canine friends