Tattoos, bling and women warriors at the British Museum

Escape’s Elizabeth Mistry explores the world of ancient nomads in Scythians: Warriors of Ancient Siberia at the British Museum.

To mark the 100th anniversary of the October Revolution in Russia – an uprising led by the Bolsheviks to overthrow the established regime – the British Museum’s latest exhibition takes visitors back in time almost 2000 years to examine the cultural legacy of the earliest-known civilisation in the region: the Scythians.

Emerging from Central Asia around 200 BC, the Scythians were a diverse people united by a common language. Experts in the art of mounted warfare – the skill of the female Scythian warriors was thought to be the inspiration behind the legendary Amazons – they established a power base covering vast swathes of Siberia and present-day Kazakhstan. At their most powerful, they controlled lands stretching from the Caucuses to China.

Perhaps eclipsed until relatively recently by the better-known Mongols who rose to power sometime after the Scythian influence had faded, it is only in the last few decades that archaeologists and historians have developed a wider understanding of who these ancient peoples were and how they lived. 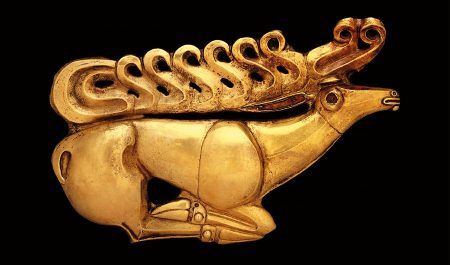 The Scythians were a diverse people united by a common language

Thanks to the work of Kazakh and Russian specialists who collaborated with the British Museum – as well as other, contemporary sources, including the Greek historian Herodotus, who lived in the fourth century BC – we know the Scythians were a nomadic people who eventually began to settle and became notorious for their ability to stay in the saddle for days as they waged war against the Persians and anyone else who happened to get in their way.

As their territory expanded and their wealth increased, the Scythian rulers commissioned fine gold work, furniture and other tools. Many of these pieces were buried with the clan leader to facilitate their journey to the next life.

In the early 18th century, reports reached the Russian Tsar, Peter the Great, of strange mounds dotted around the countryside. These proved to be burial mounds, and it was among the preserved bodies that many of the most valuable discoveries were made.

It wasn’t uncommon for archaeologists to find that grave looters had already plundered the graves, so the Tsar, a lover of antiquities and a generous patron of the arts, stepped in to issue an imperial decree.

He demanded that the most important finds be sent directly to him – and that unauthorised ‘treasure hunting’ would be punishable by death.

Having first dibs on the bounty was of course always going to mean that his collection, which eventually numbered around 250 of the finest objects, would be the best. Yet, it also served to salvage an artistic bequest that would have otherwise been lost to the public.

As the years passed – and the Tsar’s collection expanded ­– Peter realised he needed somewhere of sufficient scale to display his treasures. He ordered the construction of the Kunstkamera near his palace in St Petersburg, specifically to house the Academy of Sciences. This would later become the country’s first Russian museum. 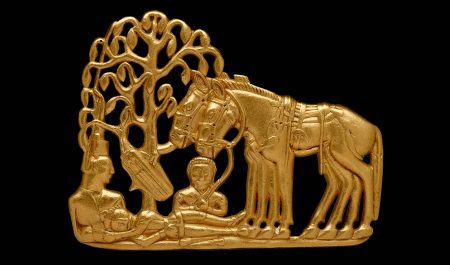 In addition to the golden hoard, there are also some impressive drawings. As each discovery arrived at the Imperial Court, he ordered his scholars to make drawings ‘as much of a likeness of’ each item in order to keep a paper record for his archive.

Seeing the objects displayed next to the original pictures for the first time reminds us of the skill of the Scythian artisans – as well as their prowess on the battlefield.

Among the weaponry and skin tattoos (younger visitors are likely to have strong feelings about these exhibits) the intricately wrought golden plaques and buckles stand out for the quality of the workmanship.

The Scythians – or Saka as they were also known in nearby Kazakhstan – appreciated craftsmanship and much of what we know about them comes from the scenes depicted on the metalwork.

We know that they prized and created a number of complex items for personal adornment, including textiles and gold jewellery that would not seem out of place in a modern-day collection.

As well as splashing out on their own appearance, the ruling classes spent lavishly on ensuring their horses were furnished with saddlery and richly decorated blankets. The favourite horses of the leaders had their own head dresses, made from wood and antlers. 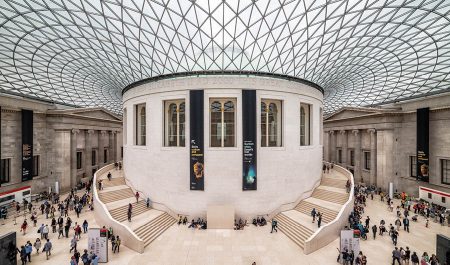 Scythians: Warriors of Ancient Siberia is at the British Museum, London, until 14 January 2018

‘The level of the aesthetic is so complex,’ curator St John Simpson told Escape. ‘We know they brought in craftspeople from elsewhere.’

The Scythians were clearly not interested in splendid isolation and actively traded with the Greeks and others. When exploring the end of the civilisation, the exhibition’s focus shifts to examine the legacy of the Scythians, pointing out how, even as their influence waned, there were Scythian mercenaries in Athens, China and elsewhere.

There’s plenty for anyone interested in ancient history in this exhibition. Curious children may also enjoy the giant animated panorama which imagines how the steppe would have looked like when the Scythians ruled the roost. The whole exhibition is on one level, making it easy to get around for anyone bringing four wheels.

Scythians: Warriors of Ancient Siberia is at the British Museum, London, until 14 January 2018
Adults £16.50, Concessions £13.00, free entry for under 16s and carers
britishmuseum.org