Great Western Railway has named one of its brand new Intercity Express Trains after Paddington Bear author Michael Bond, who died last June. The tribute was unveiled earlier this month, three days before what would have been Bond’s 92nd birthday.

The author created the character Paddington after seeing a small bear sitting alone on a shelf in a London department store near Paddington Station on Christmas Eve 1956.

The first Paddington book was released on 13 October 1958 and since then more than 35 million Paddington books have been sold worldwide. The characters have also been featured on television and in two major feature films.

The train bears Michael Bond’s name on one end, and Paddington’s name on the other. Each name is accompanied by an illustration by Peggy Fortnum, who drew the first ever Paddington images. A set of independently-designed coins that also bear Fortnum’s visuals are positioned above the names. 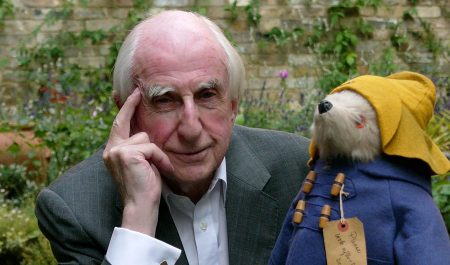 The much-loved author with Paddington Bear

Bond’s daughter Karen Jankel unveiled the train and its dedication at a special event on Platform 1, London Paddington.

‘Even before my father found the bear that inspired him to write his first book, he had decided that Paddington would make a good name for a character,’ she said. ‘He passed through Paddington Station every time he travelled from his home town of Reading, so it is hard to imagine anything more appropriate than naming a train after him.’

The dedication is part of a larger project that will see GWR’s Intercity Express Trains named after individuals and organisations that have inspired the regions that they serve.

Great Western Railway’s on-board magazine Escape interviewed Bond away back in 2012. He had fond memories of trains and train journeys, and recalled his boyhood love of steam locomotives.

“My memories of growing up in Reading have a lot to do with the railway,” he recalled. “I grew up to the sound of shunting trains and as a treat we got taken along to Reading Station to watch the Cornish Riviera Express go rushing through. Everybody was made to stand back and you saw the train tearing through, and if the driver waved at you, it really made your day.”

Books / Festival
Cheltenham Literature Festival: everything you need to know